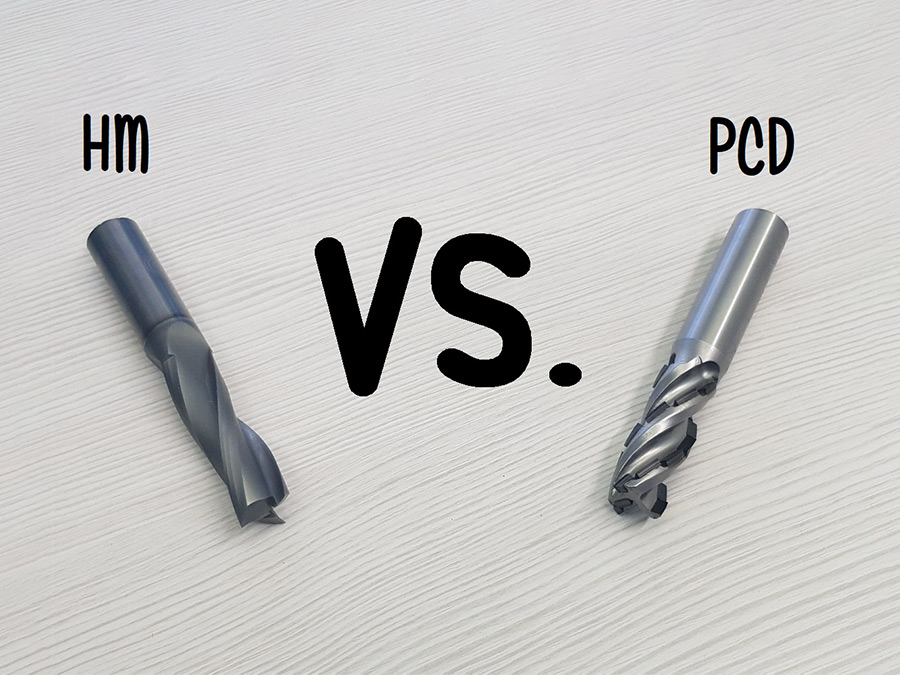 The aim of this article is to give a portrait of the two main materials that are used in the production of tools for processing wood, composite, plastics, extruded materials, etc. etc. After a brief historical review, we will try to offer a sort of mini-presentation that takes in consideration the characteristics, performances and costs to guide you in the choice between Polycrystalline Diamond (PCD) tools or Solid Carbide (HM) tools according to your needs.

HM, HW, WIDIA or Carboloy are some of the terms used to indicate Solid Carbide. The origin of this material can be traced back to the 1920s, when Baumhauer and Schroeter first sintered the carbide in 1923. The sintering process consists of mixing fine powders (in this case Tungsten Carbide), which are then pressed and overheated under high pressure, making the granules to form a single, very hard block. In 1926 Krupp acquired the patent for this material and began the production of it on an industrial scale, naming it Widia (“Wie diamant“) for the first time. A few years later, in 1928, the American General Electric brought this material for the first time in the United States, where it was named Carboloy.

Polycrystalline Diamond (PCD in Italian/English, PKD in German) is also a material that is obtained through a sintering process involving diamond particles with a metal binder. Obviously being able to recreate the material that is known to be the hardest and most resistant in the world, has always been one of the goals that scientists and engineers had in the course of modernity. Being able to synthesize the atomic crystalline structure of carbon in tetrahedrical form in the laboratory was a great challenge, and it was still General Electric that managed to obtain the first prototypes of synthetic diamonds for industry through the processing of graphite at very high temperature and pressure. Over the years CBN (Cubic Boron Nitride) was created first, and then Polycrystalline Diamond (PCD), still used today in the production of tools of the highest quality, precision and resistance.

A first essential distinction in the case of Solid Carbide is between the tools that are made from a steel body with welded HM teeths and tools that are made entirely of Hard Metal (body+cutters). Obviously the difference between the two can be seen immediately from the weight: the first ones are much lighter than the second ones. In any case, Solid Carbide tools are mainly characterized by:

Usually HW tools are very suitable for those processings that don’t require a perfect finish, as the cutting edges tend to deteriorate faster at the expense of quality. They are often used to process more materials in a short time, but require frequent resharpening until they deteriorate completely.

Differently PCD tools have often an HM body, or in different types of steel (even very heavy steel) with plates, of various sizes, that are then brazed and sharpened to obtain high performance cutting teeth. The tools in Polycrystalline Diamond are famous because they have been used in an increasingly massive way in the processing of wood and all its derivatives (from chipboards, to laminates, up to MDF, etc.). But we, as UTENSILTECNICA, in recent years have experimented this tools in the processing of a wide range of composite, plastic, extruded materials (from PVC, to fiberglass, carbon fiber, aluminum, HPL, plexiglass, etc. etc.) reaching amazing results. The only materials to avoid with the PCD tools are the ferrous ones, which cause immediate deterioration or breakage. Otherwise, for all other materials, these tools can guarantee great performances in terms of:

Obviously the price difference is considerable, as PCD tools cost more (even twice as much) than Solid Carbide tools. But taking into consideration non-secondary advantages, it is not so obvious that the initial saving corresponds to a real gain in the long term. It should be remembered that the cutting life of PCD tools is almost 50 times longer than the one of HM tools. Moreover, there are two “thicknesses” of diamond (H4 and H6): the first variant is cheaper and the second more expensive, but they ensure that you can resharpen your tool up to 6/8 times in the first case and even up to 12/15 times in the second. Not to mention that as they deteriorate earlier, HM tools have to be resharpened much more often, causing considerable inconveniences in production:

Taking note of all these differences, in the end, it is often cheaper to choose PCD tools, although at first glance the opposite would seem to be true.

Conclusion: what we offer and why choosing us

UTENSILTECNICA offers a complete service: starting from the offer of a wide range of standard tools both in HM and PCD (cylindrical cutters, flat cutters, boring drills, saw-blades, hoggers, NESTING cutters, etc. etc.), up to the possibility of designing “tailor-made” solutions for every need of our customers. Our technical department avails itself of years of experience in this sector, having been among the first to introduce the possibility of choosing between the two types of tools in Italy, and having thus had the opportunity to study in depth their pros and cons.

Accompanied by technical assistance, we also offer a very efficient re-sharpening service, ready to meet the urgent needs of having the sharpened tool back in few days. This service is not only limited to Italy, but it is also addressed to the international scene, since several partners in Europe, and in the rest of the world, have been relying for years on the quality that has made us famous through the 47 years of our activity.